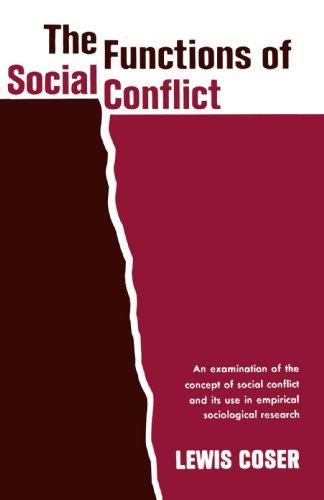 The Functions of Social Conflict

Contemporary sociologists have focused on certain aspects of social behavior while ignoring other, theoretically important aspects. One of these neglected aspects of sociological theory, according to Coser, concerns the functions of social conflict.

In order to devise a theory of social conflict, Coser explores the ideas set forth by Georg Simmel in his classical work, Conflict. This essay analyzes conflict in terms of interactive processes and depicts conflict as “a form of socialization.” [Coser, p. 31] No group can be entirely harmonious, for then it would lack process and structure. Group formation is a result of both association and dissociation, so that both conflict and cooperation serve a social function. Some certain degree of conflict is an essential element in group formation.

In Chapter two, Coser discusses how conflict serves the function of establishing and maintaining group identities. According to Simmel, conflict sets boundaries between groups by strengthening group consciousness and awareness of separateness from other groups. Reciprocal antagonisms between groups preserve social divisions and systems of stratification. These reciprocal “repulsions” both establish the identity of the various groups within the system and also help to maintain the overall social system. For example, conflict between Indian castes both establish the distinctiveness of the various groups and insure the stability of the overall social structure. The distinction between one’s own group and “outsiders” is established in and through conflict. This includes conflicts between classes, nations, ethnic groups, and political parties. In social structures where there is a substantial amount of mobility, the mutual hostility among groups is accompanied by the lower strata’s attraction to the higher strata. Such structures tend to provide many occasions for conflict.

In Chapter three, Coser describes some positive functions served by the expression of hostility in conflict. Simmel maintains that such expression maintains relationships under conditions of stress and thereby prevents group dissolution. Conflict “clears the air” and allows for the free behavioral expression of hostile dispositions. This might be thought of as a “safety-valve theory” of conflict, according to which conflict serves as an outlet for hostilities so that relationships between antagonists can be maintained. [p. 41] However, here Simmel fails to distinguish between conflict behavior and hostile feelings. While conflict changes the terms of a relationship, mere hostility need not have such effects. In addition, hostility may sometimes be deflected onto “substitute objects” rather than the primary sources of opposition. Finally, Simmel fails to note that modes of behavior other than conflict might perform similar functions of releasing tension. In short, other avenues besides conflict can fulfill “safety-valve” functions. Also, while conflict changes the terms of social interaction, mere expression of hostile feelings does not. Though hostility is expressed, the relationship as such remains unchanged. Pressure to modify the system to meet changing conditions is reduced.

Coser next discusses a distinction between “realistic” conflict and “unrealistic” conflict. Conflicts that arise from frustration of specific demands and are pursued as a means toward are “realistic” conflicts. Non-realistic conflicts, on the other hand, result from one antagonist’s need to release tension. Here conflict is an end in itself, and need not be oriented toward the attainment of specific results. Rather, it is primarily a response to frustrations in which the object appears suitable for a release of aggressiveness. There are no alternatives to means, though the target of hostility can easily change. Realistic conflict, on the other hand, will cease if the actor can find alternative ways to achieve his end. Means other than conflict are potentially available. This distinction shows why we should not explain the social phenomena of conflict entirely in terms of tension release.

Hostile impulses do not suffice to account for social conflict, and not every conflict is accompanied by aggressiveness. Conflict simply presupposes a relationship and social interaction. Nevertheless, realistic conflicts are often accompanied by distorted sentiments. There is a distinction between realistic reasons for engaging in conflict on the one hand, and the emotional energies involved during the conflict on the other. There is often failure to realize that conflict may be motivated by these two distinct yet intermingled factors: realistic conflict issues and parties’ affective investment in the conflict. The main function of the mediator is to eliminate non-realistic elements of aggressiveness so that opponents can deal more realistically with their competing claims.

In relationships in which individuals are very deeply involved, both feelings of attraction as well as feelings of hostility are likely to arise. The closer the relationship, the greater the affective investment, and the more potential there is for ambivalence. Antagonism is a central part of intimate social relations and a by-product of cooperation and frequent interaction. Close social relationships may therefore be said to contain an essential element of ambivalence.

Next, Coser suggests that the closer the relationship, the more intense the conflict. Given the ambivalence described above, it is understandable that conflict would arouse very strong feelings and lead to intense conflict. Also, the fear of intense conflict is likely to lead parties to suppress their hostile feelings, the accumulation of which is likely to further intensify the conflict once it breaks out. If parties’ total personalities and identities are involved in the relationship, there is greater likelihood that nonrealistic, hostile elements will come into play. For example, individuals who participate extensively in certain groups are typically concerned with that group’s continuance. They are likely to react violently if someone with whom they have shared the cares and responsibilities of group life wishes to break away from the group. Such renegadism threatens group unity and is often perceived by a close group as a symbolic threat to its identity. Violent reactions to disloyalty may result. Intense conflict and group loyalty are thus two aspects of the same relation.

The more frequent the interaction, the more occasions for hostile interaction. However, frequent occasions for conflict do no necessarily result in frequent conflicts. This is because the closeness of relationship and the strong mutual attachment may induce parties to avoid conflict. As stated previously, when conflict does occur, it is likely to be intense. However, conflict also has the potential to re-establish unity. Much depends on the issues that are at stake in conflict and the type of social structure in which conflict occurs. There is a distinction to be made between conflicts over basic matters of principle and conflicts over less central issues. Insofar as conflict resolves tension between antagonists it can serve to integrate relationships. However, conflict tends to serve this positive function only when it concerns interests or values that do not contradict the basic assumptions upon which the relation is founded. Loosely structured groups and open societies that are capable of avoiding conflicts over core values will tend to be most stable.

In chapter five, Coser begins to discuss the impact that conflict with out-groups has on the structure of in-groups. First, he considers the idea that conflict with outside groups tends to increase internal cohesion. Coser suggests that whether increase in centralization likewise results depends on the character of the conflict and the type of group. Centralization is more likely in cases of warlike conflict and in social structures with a marked division of labor. Despotism is likely where there is a lack of group cohesion. And both centralization and despotism depend on the group’s structure and common values prior to conflict. Social systems that lack solidarity are likely to disintegrate in the face of conflict with outside groups. In some cases, groups may actually search for or invent enemies in an effort to maintain unity and internal cohesion.

Groups engaged in continual struggle with outside groups tend to become intolerant within and are less likely to tolerate even limited dissent. These groups maintain and reinforce their unity in the face of dissent through the voluntary or forced withdrawal of those who threaten the group’s solidarity. In some cases, they may even search for internal dissenters in order to serve as scapegoats. On the other hand, groups that do not make such strong claims on people’s identity and establish no rigid criteria for membership are more likely to be large, and able to resist outside pressures. They also tend to be more flexible in structure and more capable of tolerating conflict within the group.

In Chapter six, Coser makes a distinction between two types of conflict: that in which the goal is personal and subjective, and that in which the matter in contention has an impersonal, objective aspect. He notes Simmel’s claim that objectified struggles, which go beyond personal issues, are likely to be more severe and radical. These are conflicts in which parties understand themselves as representatives of collectives or groups, fighting not for themselves, but rather for the goals and ideals of the group. Elimination of personal reasons tends to make conflict more intense. On the other hand, when parties are pursuing a common goal, objectification of the conflict can serve as a unifying element.

There are also cases where the very act of entering into conflict establishes relationships where none previously existed. Once relations have been established through conflict, other types of relations are likely to follow. Conflict often revitalizes existent norms and creates a new framework of rules and norms for the contenders. This is because conflict often leads to the modification and creation of laws as well as the growth of new institutional structures to enforce these laws. The presence of antagonistic behavior makes people aware of the need for basic norms to govern the rights and duties of citizens. The resulting creation and modification of norms makes readjustment of relationships to changed conditions possible. However, this is possible only if there is a common organizational structure in place to facilitate the acceptance of common rules and conformity with them. Also, if the parties are relatively balanced in strength, a unified party prefers a unified party. Each group’s having a centralized internal structure ensures that once they have devised some solution, peace can be declared and maintained. There will be no lingering enemies to disrupt the relationships. Finally, conflict is integrative insofar as it allows parties to assess their relative power and thus serves as a balancing mechanism to help consolidate societies.

Conflict also leads to the formation of coalitions and associations between previously unrelated parties. If several parties face a common opponent, bonds tend to develop between them. This can lead to the formation of new groups or result in instrumental associations in the face of a common threat. In short, conflicts with some produce associations with others. However, the unification that results when coalitions are formed simply for the purpose of defense need not be very thoroughgoing. Alliance can simply be an expression of groups’ desire for self-preservation. Of course, such alliances may be perceived by other groups as threatening and unfriendly. This may lead to the creation of new associations and coalition, thus drawing groups into new social relations.